My research interests are in the area of networked, large-scale, and dynamic systems, such as power grids, cooperative multi-agent networks, and complex biological systems. My main thrust is on security, reliability, and trust management in cyber-physical systems, with an emphasis on distributed control and estimation of large-scale systems. A second research direction is in network science, and particularly in the intersection between control theory and network neuro- science. A third interest is in mobile robotics, environmental patrolling, and persistent surveillance, with an emphasis on combinatorial optimization, complexity theory, and network algorithms. Below is a description of some selected projects.

Cluster Synchronization in Networks of Oscillators 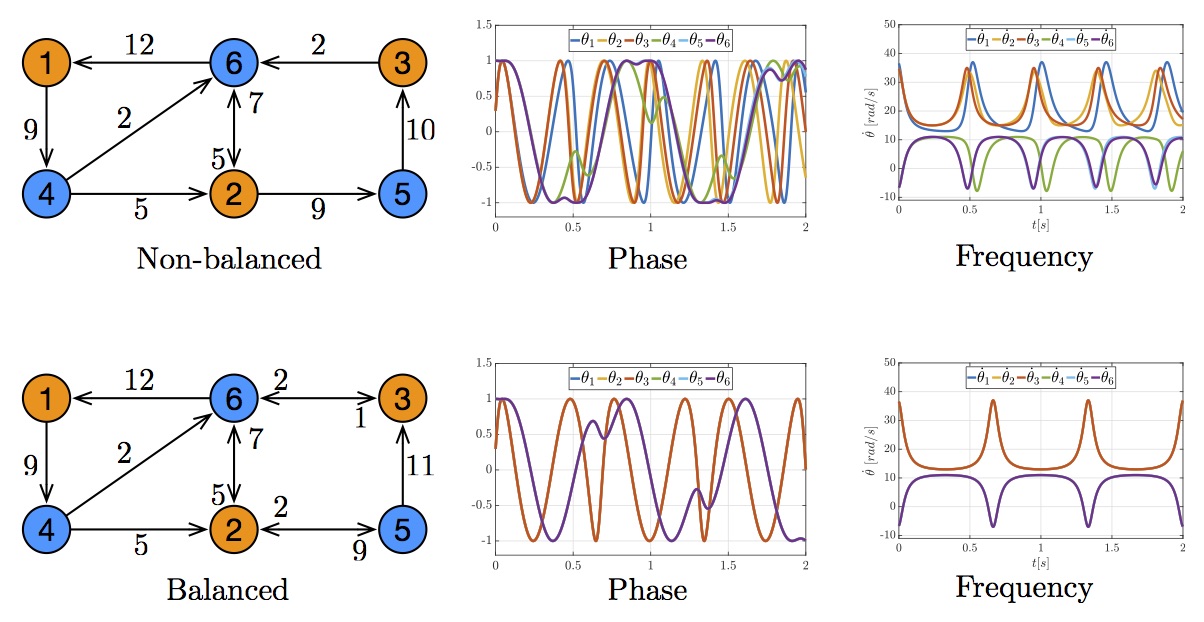 Synchronization of coupled oscillators is everywhere in nature and in several man-made systems. While some systems require complete synchronization among all the parts to function properly, others rely on cluster or partial synchronization, where subsets of nodes exhibit coherent behaviors that remain independent from the evolution of other oscillators in the network. For example, while partial synchronization patterns have been observed in healthy individuals, complete synchronization in neural systems is associated with degenerative diseases including Parkinson's and Huntington's diseases, and epilepsy. Cluster synchronization has received attention only recently, and several fundamental questions remain unanswered, including the characterization of the network features enabling the formation of a desired pattern, and the development of control mechanisms to enforce the emergence of clusters.
We have studied networks of heterogeneous Kuramoto oscillators, and have characterized intrinsic and topological conditions that ensure the formation of desired clusters of oscillators. Although Kuramoto networks exhibit nonlinear dynamics, we adopt tools from linear algebra and graph theory to characterize network conditions enabling the formation of a given synchronization pattern. Further, we design a control mechanism to perturb (a subset of) the network weights so as to enforce or prevent desired synchronization patterns. For more details see, for instance, our works Synchronization Patterns in Networks of Kuramoto Oscillators: A Geometric Approach for Analysis and Control, Bode meets Kuramoto: Synchronized Clusters in Oscillatory Networks, and Cluster Synchronization in Networks of Kuramoto Oscillators.

Cognitive function is driven by dynamic interactions between large-scale neural circuits or networks, enabling behaviour. However, fundamental principles constraining these dynamic network processes have remained elusive. Here we use tools from control and network theories to offer a mechanistic explanation for how the brain moves between cognitive states drawn from the network organization of white matter microstructure. Our results suggest that densely connected areas, particularly in the default mode system, facilitate the movement of the brain to many easily reachable states. Weakly connected areas, particularly in cognitive control systems, facilitate the movement of the brain to difficult-to-reach states. Areas located on the boundary between network communities, particularly in attentional control systems, facilitate the integration or segregation of diverse cognitive systems. Our results suggest that structural network differences between cognitive circuits dictate their distinct roles in controlling trajectories of brain network function. For more details see, for instance, our works Controllability of structural brain networks, Optimally controlling the human connectome: the role of network topology, Stimulation-Based Control of Dynamic Brain Networks, and Autaptic Connections Shift Network Excitability and Bursting.

Distributed systems and networks have permeated modern society in many domains including energy production, health care, and telecommunications. The integration of cyber technologies with physical processes increases system efficiency but, at the same time, it introduces vulnerabilities that undermine the reliability of critical infrastructures -- an infamous example is the case of the Maroochy water breach. In contrast with legacy control system, cyber-physical systems are prone to failures and coordinated attacks against their physical infrastructure, as well as cyber attacks against their data management and communication layer. Attackers can now compromise physical processes by exploiting cyber vulnerabilities, and appropriate cyber-physical protections are needed -- see the SQL Slammer worm against the David-Besse nuclear plant, and the Stuxnet worm against the Iranian nuclear facilities. Cyber-physical security is a multidisciplinary field involving Control Theory, Game Theory, Computer Security, and Optimization, and it is attracting interest from several scientific societies.
We contribute to cyber-physical security by (i) proposing a mathematical framework for cyber-physical systems, malicious attackers, and security monitors, (ii) establishing a detailed link between security and the fault detection and identification literature, (iii) characterizing fundamental monitoring limitations from system-theoretic and graph-theoretic perspectives, (iv) designing centralized and distributed attack detection and identification monitors, and (v) providing insight into the design of coordinated attacks amenable to simple implementation. For more details see, for instance, our works Consensus Computation in Unreliable Networks: A System Theoretic Approach, Attack Detection and Identification in Cyber-Physical Systems, and Data-injection attacks in stochastic control systems: Detectability and performance tradeoffs.

Controllability and Observability of Complex Networks

Networks accomplish complex behaviors via local interactions of simpler units. The electrical power grid, mass transportation systems, and cellular networks are instances of modern technological networks, while metabolic and brain networks are biological examples. The ability to control and reconfigure complex networks via external controls is fundamental to guarantee a reliable and efficient network functionality. Despite important advances in the theory of control of dynamical systems, several questions regarding the control of complex networks are largely unexplored.
The problem of controlling complex networks consists of the selection of a set of control nodes, and the design of a distributed control law to steer the network to a target state. We study the problem of controlling complex networks from an energy perspective. Inspired by classic controllability notions for dynamical systems, we define the energy to control a network as the worst-case energy of the control input to reach a target state. By combining this controllability notion with graph theory, we characterize tradeoffs between the energy to control a given network and the number of control nodes, and we develop a distributed control strategy with performance guarantees for complex networks. For more details see, for instance, our works Controllability Metrics, Limitations and Algorithms for Complex Networks, The Observability Radius of Networks, and The Role of Diameter in the Controllability of Complex Networks. 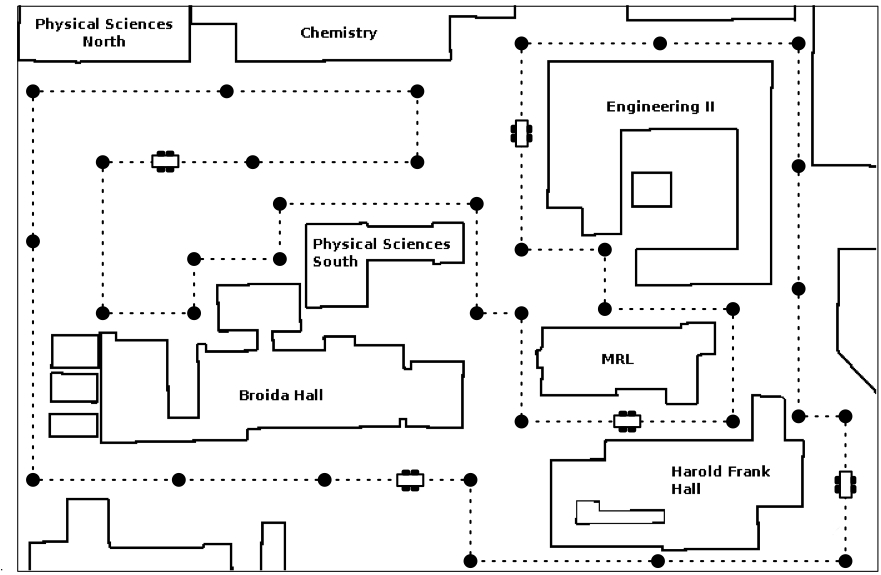 Coordinated teams of autonomous agents can efficiently complete tasks requiring repetitive execution, such as monitoring oil spills, detecting forest fires, tracking border changes, and surveilling an environment. Surveillance of an environment requires that the robots persistently travel around the area, and one of the main challenges consists in scheduling the robots trajectories as to optimize a certain performance criteria. We consider two different class of robots, namely mobile robots and PTZ cameras. For the case of mobile robots, we model the environment as a robotic roadmap, and we consider time-based performance criteria, such as the longest time gap between any two visits of the same region (refresh time), and the longest time to propagate a message to all robots (latency). We formulate deterministic and stochastic surveillance problems, and we derive centralized and distributed surveillance strategies with performance guarantees. For the case of PTZ cameras, we study the interplay between cameras and smart evaders, and we develop centralized and distributed algorithms for cameras coordination and detection. For more details see, for instance, our works On Cooperative Patrolling: Optimal Trajectories, Complexity Analysis and Approximation Algorithms, Cooperative Patrolling via Weighted Tours: Performance Analysis and Distributed Algorithms, Stochastic Surveillance Strategies for Spatial Quickest Detection, and Camera Network Coordination for Intruder Detection.

Sensor and actuator networks have recently attracted interest from different research communities., and classic computation, control, and estimation problems have been reformulated to conform the distributed nature of these networked systems. An important example is the consensus problem, where members of a network aim to agree on a parameter of interest via distributed computation. Consensus algorithms have applicability in many domains, including robotics, estimation, and parallel computation. In this work we focus on the consensus problem for networks of agents with limited memory, computation, and communication capabilities. We assume that agents are capable of storing, processing, and transmitting exclusively elements from a finite and pre-specified alphabet. We model this situation with the formalism of finite fields, where the alphabet consists of a set of integers, and operations are performed according to modular arithmetic. We study linear consensus networks over finite fields where, at each time instant, each agent updates its state as a weighted combination over a finite field of its own value and those received from its neighbors. Besides consensus in capacity and memory constrained networks, our finite-field consensus method is applicable to problems in cooperative control, networked systems, and network coding, such as averaging, load balancing, and pose estimation from relative measurements. Additionally, the use of a finite alphabet for computation and communication makes our consensus method easily implementable and resilient to communication noise. For more details see, for instance, our work Consensus Networks over Finite Fields.

Distributed Estimation and Control over Networks 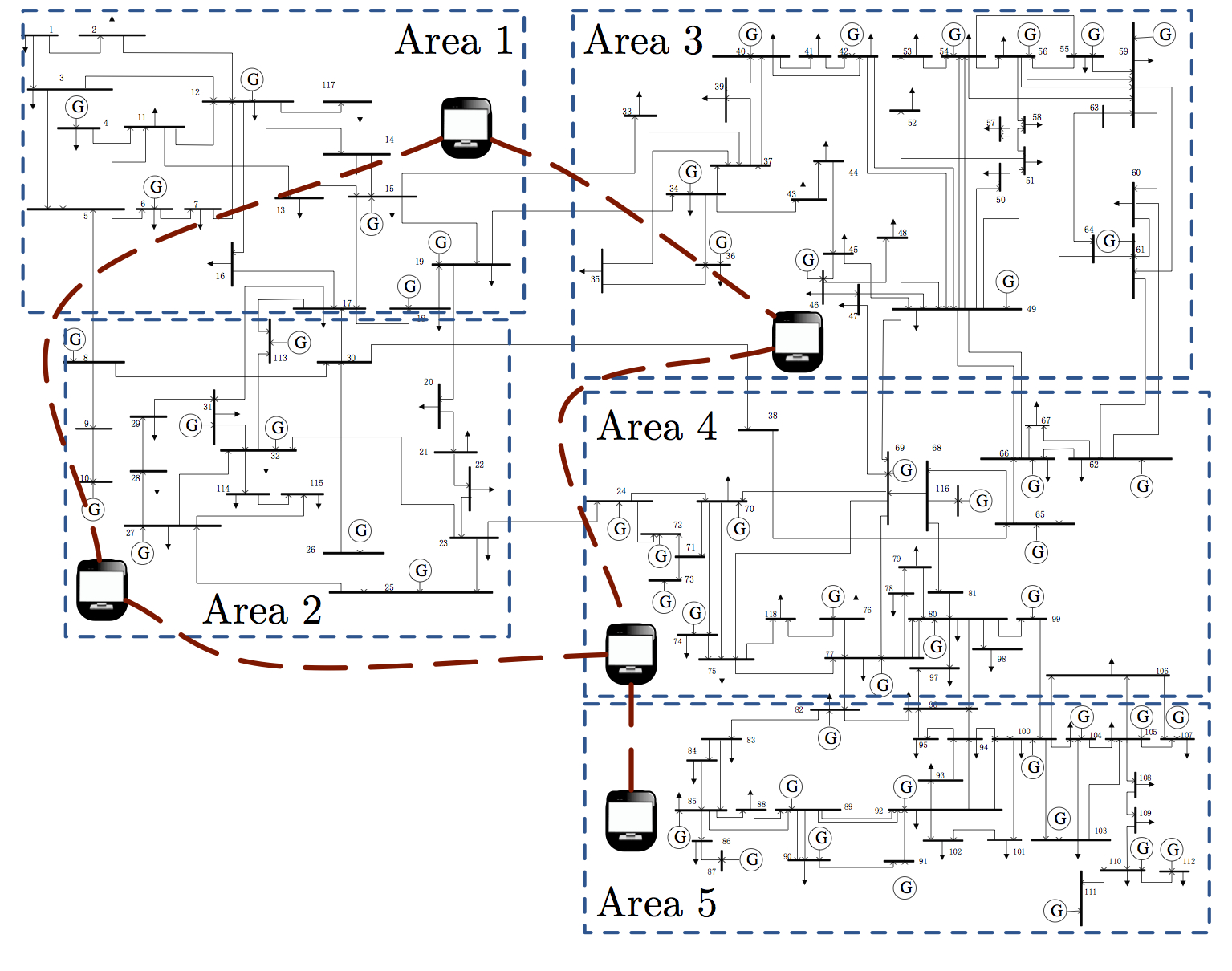 State estimation is needed to maintain a system in a secure operating condition. For high-dimensional and spatially distributed systems, centralized methods cannot be used to solve estimation, control, and fault detection problems, and new decentralized techniques need to be developed. One possibility is to deploy monitors in different geographical locations, each one responsible for a subpart of the whole system. Monitors have local information about the system topology and state, and implement local estimation and control schemes together with an information exchange mechanisms to recover the performance of a centralized scheme. We propose distributed and scalable algorithms with finite convergence time for state estimation in large-scale systems. The proposed monitors (i) require local system knowledge and computation, and communication among neighboring control centers, (ii) tolerate system and measurement noise and modeling uncertainties, and (iii) are robust against a fairly general class of attacks. Finally, our analysis reveals elegant connections between state estimation, decentralized control theory, and parallel computation methods. For more details see, for instance, our works Distributed Estimation via Iterative Projections with Application to Power Network Monitoring and Continuous-Time Distributed Observers with Discrete Communication.